The UAV counter-gun is a kind of electromagnetic interference equipment with a gun type, which is not only a gun type but also a splint type.

The Wuhan police demonstrated that they are equipped with the latest domestically-made “electromagnetic rifles.” In the opening match of the China League One held last week, a drone of unknown origin broke into the event site, seriously disrupting the progress of the game. Afterwards, the Wuhan police took out their new equipment-a silver-gray drone counter-gun about 1 meter long, and “shot down” the opponent with a single shot. On the day of the match, the Wuhan police used the gun six times to expel the approaching drone. 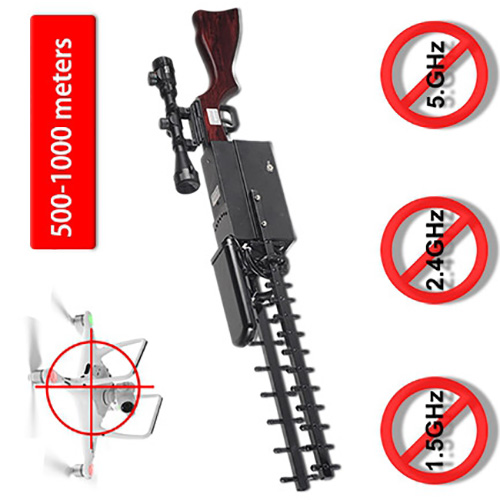 The drone was not broken into pieces, but landed slowly on the ground. According to the International Business Times, the principle of this weapon is to emit electromagnetic interference waves between 2.4GHz and 5.8GHz, interrupting the connection between remote control equipment and drones. Because most drone remote controls are also in this frequency range.

This drone jammer uses a combination of an integrated information source and a broadband power amplifier, and the source integrates 8 frequency bands. The full frequency band coverage of radio from 300MHz to 6GHz is closer to the current mainstream UAV radio remote control and image transmission signal modulation method. The intensity of electromagnetic waves it emits is 8 times that of ordinary jammers. It can accurately distinguish various drones at a distance of 3 to 5 kilometers, and effectively intercept within a range of 500 meters to 2000 meters.